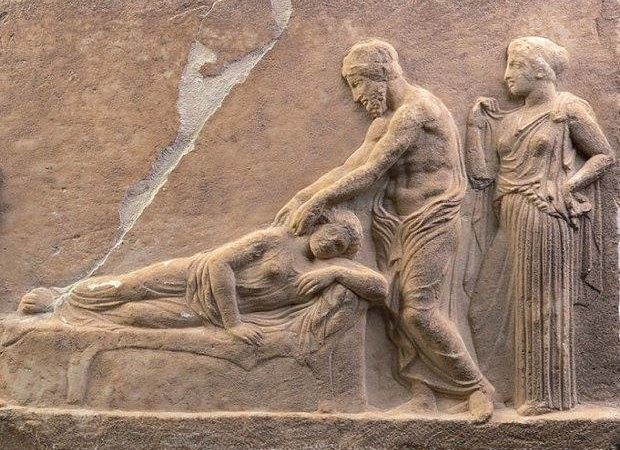 Asclepieia were the first therapeutic complexes that were built in places of natural and energy wealth in ancient Greece. The treatments they offered were based on holistic medicine practices where man is treated as an energy being and disease as a blockade of energy flow, principles on which Bioresonance is based on.

Besides sanatoriums, there were sanctuaries and places of worship of the god Asklipios, which offered their services to the wider Greek region where the patient was treated with respect, emphasizing the importance of linking treatment to the fight against diseases with the energy and strength that unites man and nature.
Almost all the ancient Greek cities had their own Asclepius. It is estimated that Asclepius in ancient Greece exceeded 320 while, according to some other sources, the number actually exceeded 500. Indeed, the sanitary therapeutic methods applied to the Asclepius have had very good results in rare and serious diseases in the ancient world.

There were Asclepies that evolved into large building complexes, which, besides the basic area of ​​the sanatorium and the sanctuary, included entertaining areas such as gyms, baths and theaters - the famous ancient theater of Epidaurus. They were not built in random places. The choice of Asclepieion's position was of great importance. They were built in places of natural beauty and great energy loading, in which they examined the composition of the terrain, the altitude, the fauna and flora of the area, the waters and various geological phenomena.
Green landscapes near idyllic views and naturally running waters such as the sea or thermal springs have been key energy points on living parts of the planet. Asclepieas as healing centers and sacred temples were based on the perception of man as an energy grid and aimed at the energy rehabilitation and harmonization of the individual with nature and society and belonged to a wider energy field in which individual centers are linked together as members of a body. They chose regions that emitted separate energy. They believed that the energy of such a space could cure people and awaken their ability to co-ordinate with them.

The concept of healing according to the philosophy of ancient Greek thought
is widened from today's concepts of healing and was directly related to harmony. Unlike other ancient civilizations, in Asclepie, the medical idea held a prominent position and was based on Chiroplastics, Magnetotherapy and Engraving, using the first principles of healing art and the use of herbs for healing purposes, which were cultivated on magnetized soil. By these methods they vibrated the various physical and mental illnesses, a basic philosophy of bioresonance as a diagnostic and therapeutic method. From ancient archaeological finds, Asklipiers offered a holistic health care where the patient was treated as a complete being that was fully in line with its environment and the energy that exists in it, and an attempt was made to normalize energy conflicts and restore its equilibria
of the energy flow, with the help of medical and pharmaceutical interventions. In the same direction, bioresonance that is aimed at bioenergy balancing converges.

Paralio Astros, which in ancient times was called Thyreatida and was an ancient village of Kynouria, which belonged to Argolida, and had its own Asclepius. It was also one of the most known Asclepius such as the one of Epidaurus with the famous theater and ancient Gortynus, which used hot springs with hot air technology. Thyrea (today's Astros) was an ideal location as it was close to abundant spring waters, which helped cleanse and heal the sufferer
but also hydrotherapy (balneotherapy and hydroposis), which was the basic treatment of Asclepius. In this small valley of Thyra, the sanctuary of Asklipiade Polemokratis, which was a sacred sanctuary mentioned by Pausanias, was developed. The sanctuary is referred to as a landmark in which Polemokratis, son of Machaon and grandson of Asclepius, was worshiped. There have been found carved messages of the Aspulpiades, the remains of various types of funeral feasts and a statue of Asklepieus. Next to the sanctuary, there were thermal baths and later the villa of Herod Atticus, which belonged to an important person, was built, Tiberius Claudios Attikos Herodis, an orator, philosopher and
politician. The villa is a huge building and urban complex and is considered to be one of the richest archaeological monuments in Europe, with a wealth of architectural, sculptural and mosaic finds.

The choice of area to hold the conference was not accidental. The rich history of the area, the beautiful and tranquil scenery with lush vegetation, the abundant running waters, as well as the proximity to the sacred Aspelipeion contributed.

The company maintains a technical support service and repair / maintainance service for the devices in Athens, and gives a guarantee of working condition for its devices. Therefore, the company supports the final consumer, without putting the collaborator at risk in case of device malfunctions.